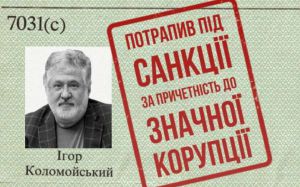 U.S. Secretary of State Antony Blinken made the public designation on March 5 of this year. Now the Ukrainian oligarch and his immediate family are banned the entry into the United States. “Today, I am announcing the public designation of oligarch and former Ukrainian public official Ihor Kolomoyskyy due to his involvement in significant corruption. In his official capacity as a Governor of Ukraine’s Dnipropetrovsk Oblast from 2014 to 2015, Kolomoyskyy was involved in corrupt acts that undermined rule of law and the Ukrainian public’s faith in their government’s democratic institutions and public processes, including using his political influence and official power for his personal benefit”, said Blinken in his statement. Though sanctions are based on acts Kolomoisky did during his time in the office of the head of the Dnipropetrovsk Regional Administration, the State Secretary stressed that he wanted “to express concern about Kolomoyskyy’s current and ongoing efforts to undermine Ukraine’s democratic processes and institutions, which pose a serious threat to its future”. Antony Blinken concluded that “this designation reaffirms the U.S. commitment to supporting political, economic, and justice sector reforms that are key to Ukraine’s Euro-Atlantic path. The United States continues to stand with all Ukrainians whose work drives reforms forward. The Department will continue to use authorities like this to promote accountability for corrupt actors in this region and globally”. After the official announcement of sanctions against oligarch Kolomoisky, the Office of the President of Ukraine released a statement to thank all its partners for their help in fighting the oligarch system. “To achieve economic growth and the Euro-Atlantic integration that has been declared both in the Constitution and first of all in Ukrainian society, Ukraine must overcome the oligarchs-domineering system. President Zelenskyy’s actions speak for themselves. For less than two years of his being in the office of the President, he did many times more for fighting the country’s oligarchy than any of the previous presidents. And he did it without bombastic slogans and populism. Ukraine is grateful to all its partners for support it along this path”, said the statement. Analysts comment in a very enthusiastic way on the American sanctions against Kolomoisky who was the chief sponsor of Volodymyr Zelenskyy’s election campaign and who still has a very strong influence on all political processes in Ukraine. For instance, Dariya Kalenyuk, director of the Center for combating corruption, has this to say, “Today, the U.S. Secretary of State publicly announces that the entry into the United States is banned for the oligarch and his family. It is an unprecedented step. Also, it is a signal from the United States for all those who still cooperate with Kolomoisky and cover him: they may be on the sanctions list, too”. Ex-Prime Minister Oleksiy Honcharuk believes that the sanctions against one of the most powerful Ukrainian tycoons are a black mark for Kolomoisky and his milieu. Ukrainian journalist Yuri Butusov believes that a blow at such an influential oligarch makes the influence of the United States in Ukraine even stronger. “It is perhaps the only obvious result of American sanctions against Kolomoisky in Ukrainian politics. We shall wait and see will this be enough of a shake-up for President Zelenskyy to reshuffle his surroundings and launch structural reforms”, he said. Analyst Roman Fedyuk writes that the sanctions are a clear signal from the new Washington Administration that Zelenskyy may count on the powerful political and organizational support of the United States if he decides to oppose oligarchs. Ihor Kolomoisky is one of the ten wealthiest Ukrainians. With the fortune of one billion dollars, he was ranked eighth according to the Forbes-Ukraine magazine in May 2020. The lawsuits against him have been filed both in Ukraine and the United States. In 2016, the country’s biggest commercial bank PrivatBank that belonged to Kolomoisky was on the verge of bankruptcy and was bailed out by the state. To save the bank from collapse, the Ukrainian government invested 155 billion hryvnas of aid funds. Since 2017, Kolomoisky and his business associates are accused of the embezzlement of two billion dollars through a number of illegal financial operations. Last August, the U.S. Department of Justice filed two civil actions against Ihor Kolomoisky and Ukrainian businessman Hennadiy Boholyubov accusing them of laundering the PrivatBank funds. The Justice Department demands that the real estate they have purchased in the United States to be confiscated. The estimated property value stands at 70 million dollars. The newspaper Voice of Ukraine
﻿