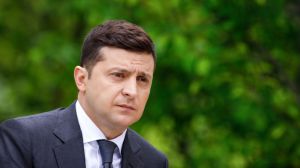 Such was the response of President Zelenskyy to information made public by the U.S. intelligence that Russia, China and Iran are trying to interfere in American presidential elections and work against the chief candidates to the post of the President, namely, Incumbent President Donald Trump and Democratic Candidate Joe Biden. The Ukrainian President says in his address posted in his official Telegram Channel on August 8 that Ukraine has never allowed itself and will never allow in the future any kind of interference in the election process of other countries, including the United States. Unfortunately, Zelenskyy writes, so-called “sensational facts” appear in the news media from time to time about the alleged participation of Ukraine in one way or another in election campaigns in other countries. “As the President of Ukraine, I want to underscore once more my personal position and the fundamental position of our State. Never and under no circumstances, it is inadmissible for us to intrude in internal affairs of another country. I want to assure our partners that Ukraine has never allowed and will never allow itself in the future to meddle in national elections and in such a way to inflict a damage to our friendly and sincere partnership relations with the United States”, Zelenskyy stressed. At the same time, he has voiced his confidence that Ukraine’s partners have the same respectful attitude to his country’s sovereign right to govern its national affairs and have its own priorities. “These are the only principles that can serve as a foundation for reliable and firm strategic partnership”, noted the President of Ukraine. Zelenskyy has also stressed that to prevent any attempts to drag Ukraine into the internal policy of the United States is the issue of the national security of Ukraine. “That’s why I think that Ukrainian citizens should refrain from any activities that can be connected in one way or the other with American presidential elections in an attempt to solve their political or business problems. The reputation of Ukraine costs much more than the reputation of any of our politicians”, he said. Political analysts claim that the address of the Ukrainian President has come as a response to the statement made by William Evanina, Director of the U.S. National Counterintelligence and Security Center (NCSC), on August 7. He gives facts of meddling in American domestic affairs by Russia, China and Iran. His statement in particular reads, “Ahead of the 2020 U.S. elections, foreign states will continue to use covert and overt influence measures in their attempts to sway U.S. voters’ preferences and perspectives, shift U.S. policies, increase discord in the United States, and undermine the American people’s confidence in our democratic process”. According to NCSC Director Evanina, Russia makes use of a whole range of measures “to primarily denigrate former Vice President Biden and what it sees as an anti-Russia “establishment.” Evanina goes on to say in his statement that the Kremlin employs different measures. For example, it uses Andriy Derkach, a non-faction deputy of the Verkhovna Rada (Ukrainian Parliament), who “is spreading claims about corruption – including through publicizing leaked phone calls – to undermine former Vice President Biden’s candidacy and the Democratic Party”. The newspaper Holos Ukrainy
﻿